Some Experiences from the Field

At a workshop among several Quichua villages in the Napo Province, several youth asked us to teach them about medicinal plants. They no longer had any elders living among some 35 families located in the wilderness along the eastern side of Galeras National Park. They admitted that their knowledge of the plants was minimal and that on several occasions they knew that an illness they had could have been cured with plants had they known how to use them.

Soon a meeting was organized on the subject and everyone was told to bring one plant they knew well. At the gathering everyone shared their plant, its uses and preparations. At the end of the circle it was a delight to see the enthusiasm among the group after having suddenly learned about so many plants. It was clear how the common body of knowledge was raised, and people suggested that these practical and simple methods of sharing knowledge should be repeated.

In a different region of the Ecuadorian Amazon, after days hiking from the end of the road in the headwaters country of the Curaray River in Huaorani Territory, we met with forest master grandfather Huepe Coba. Living aloof among all the fluctuations, Huepe Coba, 95 years old, with a body like a rock and full of constant vigor, spent weeks generously and patiently teaching us everything when we asked to learn about his plants.

Huepe could distinguish between pollination and dispersal. There were no plants, trees, vines or grasses that Huepe could not name. Huepe showed us the favorite foods of the toucans, and the seeds or pulps of fruits they brought back for their young. He showed us the favorite tree of the leaf cutter ants, and other trees around whose base certain beetles choose to make chimney-like columns of clay in the earth. Laughing Huepe would rattle off name after name of every tree and bush around us. His knowledge of medicinal plants was certain as well. He showed us a tree, Pengunkohue (Tabernaemontana sp.), whose sap was a cure for eye cataracts, and the bark of another, Umempa-tahuehue (Fabaceae), which was used as an anti-parasitic.

When told of the bilingual book for the Huaorani youth we wished to make he said, "This is important for our children's children and so that we may always live well within our territory."

On another occasion and in a province to the North, we met with Don Emilio Lucitante, an elder Kofán living among the Secoya on the Aguarico River, a true and unique master of the plants. We told him of our vision to make a book on Secoya Ethnobotany for the Secoya school and youth, and we explained that this was the reason we wished to study with him. "Good idea," he said, although he was quite aloof about it. What was important to him, as an expert, was that we paid him. Then he would teach. We paid him his requested sum and began the study of hundreds of forest medicines.

His knowledge was specific to the rarest, most inconspicuous herbs growing on the trunk of trees, or scanty lianas. One small fern, like a little green umbrella stuck to the base of a tree, was the most effective headache remedy. Several drops of the juice through the nose would cure a headache in minutes. He taught of the forest medicines that assist in effortless child-birthing, ones that reconstitute the liver and others that clean the blood. These elders are true forest masters, true indigenous scientists. Their methodology is rigorous and they rank in a class of their own. They have the knowledge of hundreds or thousands of plants, and they are at peace and live in total ease in the forest. To know them, learn from them and be their friends indeed is an honor. These masters have generously shared their wisdom and have sat patiently as we catalogued hundreds of species of plants, informing us of their names and uses.

Ethnobotany itself is facing new pressures. Many political leaders have called for bans on ethnological studies because they see no benefits in it for their communities. The diversity of groups and peoples involved also creates a variety of views on biological knowledge. Ethnobotanists who attempt to extract knowledge briefly can be fooled by savvy informants who would prefer to give false information than be rude and turn an otherwise friendly visitor away. This becomes more of an issue in light of the fact that inside the communities themselves few, if any, youth are studying the plants and the last elders are getting older. This is also why GO consciously engages with forest peoples communities to assist in situ transmission of forest lore.

Contemporary ethnobotanists must be flexible in order to meet the current demands of the ground-level situation. If the discipline of ethnobotany is going to have an ethical basis, the entire cycle must be considered. The first priority must be to build a bridge where this knowledge can flow from one generation to the next among the indigenous or local peoples' communities.

Unfortunately, the focus of most ethnobotanists is to publish their findings for a foreign audience. Such studies, although valuable in their own right, eventually end up filed on dusty bookshelves or contribute mainly to private gain. In contrast, GO seeks first to understand clearly what is happening on Earth and to conserve resources as well as use limited energy in strategic places. 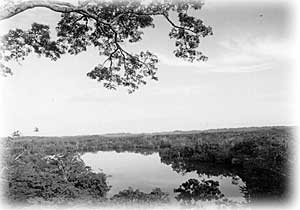 Given the important role that indigenous people(s) must take in protecting their forest, plant lore is critical to the process. Among many indigenous communities, especially in Ecuador among the ethnic minorities, the elders who embody the traditional ways and knowledge are fewer and fewer. Among the Siona, Secoya, Záparo, Kofán, Huaorani, Quichua, Achuar, Shiwiar, Tsachila, Awá, and Chachi communities, all ethnic rainforest minorities, there may live fewer than 5 to 10 knowledgeable old timers among each group. This is probably the case among all indigenous ethnic minorities on Earth.

It is a fragile thread for age-old wisdom to be passed along. If this bridge can be widened, it is sure that priceless and irreplaceable knowledge of the uses of plants and of our inter-relationship with nature will survive. It is also our deepest aspiration that this model will inspire others of like mind in other countries. Ethnobotany is promising indeed, offering an opportunity to contribute significantly in improving the conditions of all life on Earth for all species.